Income distribution is often presented in "Lorenz curves".  The following is an attempt to defy conventional wisdom:

This chart fails my self-sufficiency test... 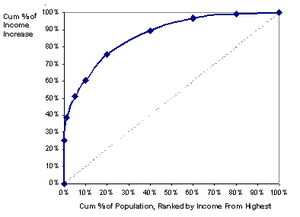 Why not stick with a Lorenz curve?  This presentation is versatile.  The diagonal is a line of "equality": for example, the (20%,20%) point on this line indicates that the top 20% of the population (ranked by decreasing income) took exactly 20% of the income growth in 2003.

A lot of information can be read off this chart: the top 0.1% earners took about 25% of all income increase; the top 1% took 40%; the top 20% took almost 80%.  In general, a curve that bends away from the diagonal (like this one) depicts severe inequality.

However, in many practical situations as is here, comparison with the diagonal is meaningless.  The "ideal" society would probably not be one in which annual income growth is equally distributed among all taxpayers.  (I'll leave the rationalization to economists and sociologists.) 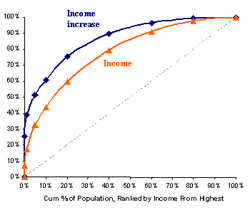 For more analysis: The Richest 0.1% II

I've long wondered why government agencies--like the military--who profess concern for their junior members, always give raises based on a percentage of income. It would seem that an occasional "flat raise"--$50/month for everyone--would bring the two curves back in synch. Hmm, sounds like a good homework problem for my students...