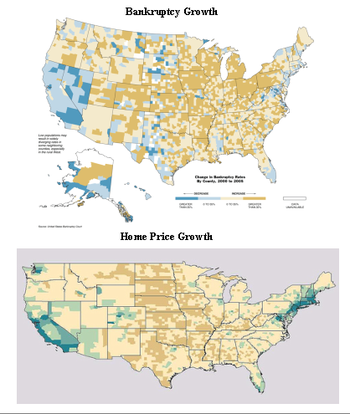 On closer reading of this analysis I should clarify my picture. This is median housing prices in 1990, not the growth in housing prices. Give me a day or two to get the data together. I also promise to give you a legend this time.

I don't think I can do a cartogram, and I know you don't like graduated circles to denote changes in numbers. Give me some time to think about how to visualize that one with the software I have at my disposal. Do you have any idea where I can get the bankruptcy data for counties, that would help. I could probably do a 3d plot with elevation being density of people and coloring based upon bankruptcy.

I'd prefer a scatterplot. Separate scatterplots for each region of the country, perhaps.

Scatter plot is a great idea. There is a tendency to put geographical data on maps by default but sometimes the message is not really in the geography as in this case. By using colors and symbols, it's easy enough to see regional effects anyway.

How would you deal with the issue of the "small sample size" counties though? Those data points are inherently less reliable. Grayscale proportional to sample size, perhaps?

Grayscale could work; i've never experimented with this. The gov't people who make cancer maps combine the smallest counties to get to a minimal sample size, then use shading to distinguish counties (or combined counties) that statistically-significantly differ from the U.S. average. Not that these are perfect solutions--just some more ideas that are out there. The more access we all have to software to make these scatterplots and maps, the better they'll become. I just think it's too bad that it's so easy for people to make maps with shading, since it inevitably overemphasizes large-land-area-counties/states.

Well put! The underlying problem is skewed population density; if the density weren't much higher along the coastal and urban areas than the suburban/rural areas, then it'd not have been a big deal.

You also brought up nicely the point that the map is not the only way to present state/county type data. Often, chaining ourselves to geography severely limits the value of the data graphic.