Junk Charts
Welcome Twitter About Book Blog RSS
Who works the hardest? I
Which is the bigger mess?

Who works the hardest? II

Time-series data is tricky to deal with: indeed, an alarm bell should be set to ring every time we see a graph containing few sampled times (in the working hours chart, we were shown two times: 1990 and 2004).  What happened during the intervening 14 years?  one wonders.  Regarding the outlier for Japan 1990, one asks if it is an outlier in time and country or just in time.

Here is a multi-period Bumps chart: 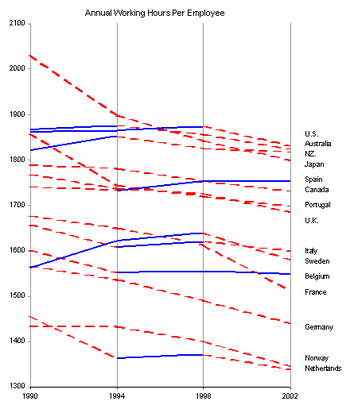 At first sight, the choice of two sampled times has not distorted the picture much.  The general trend (downwards, and clustering) remains intact.

The blue segments are periods of increasing work hours; the red, decreasing hours.

This reveals the temporal pattern.  Between 1998 and 2002, working hours decreased in most countries (except Spain and Belgium).  However, for 6 out of 15 countries, 1994-8 represented a period of increasing hours.  These six included U.S. and five European countries.

Half the countries experienced at least one 4-year period in which working hours increased.

Here are two versions using Trellis/lattice. There's an interesting point that could be made here about banking the aspect ratio.