Who works the hardest? I

Regarding the paired bar chart (right), the Economist made these observations:

This sort of paired bar charts is frequently used in cross-tabulations of data (here, cross-tabulating country by year).  I find charts like this one confusing.  For example, the last point comparing U.S. and New Zealand requires visual comparison of two bars which are separated by 25 irrelevant bars.  Moreover, because the countries are arranged in order of increasing 2004 working hours, it is difficult to verify the statement about European countries.

The junkchart version below is modeled after the Bumps chart (here, here and here), except that the vertical axis is measured on a continuous scale rather than as ranks. 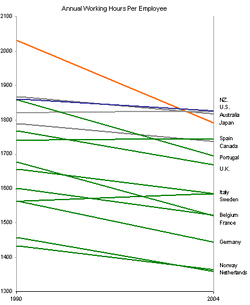 From this chart, we further note that despite a general downward trend, there was variation between the European countries.  While most countries reduce working hours slightly, at least two European countries appeared to have increased hours.  Further, excluding Japan, the bunch of lines drifted down by less than 10% over 14 years.

One secret of this chart is that it takes advantage of both vertical axes, plotting two data series measured on the same scale.  Thus, this chart does not emphasize 2004 hours at the expense of 1990 hours. 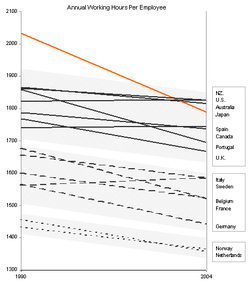 Based on this chart and 1990 hours, we can find three clusters of countries: those working over 1700 hours (NZ, U.S., Australia, Spain, Canada, Portugal, U.K.); those working between 1500 and 1700 hours (Italy, Sweden, Belgium, France, Germany); and those working fewer than 1500 (Norway, Netherlands).  Japan could be considered an outlier in 1990 but it re-joined the hardest-working cluster by 2004.  The lines within each cluster has drifted down slightly from 1990 to 2004 but no member country strayed from its cluster (but Germany may be the first to do so in the next few years).  The chart on the right makes this cluster structure clear.

Based on previous commentary, some of you will want to see more data than just the two years.  In the next post, I'll take a look at what further insights can be attained if we had more data.

How about clustering on slope, rather than level? I see two or three very different clusters in that case...

Here's a version that shows relative rankings in 1990, 2004, and the percent change:
http://anonymous.coward.free.fr/misc/workinghours.png

With only 2 time points, why not do a scatterplot?

Beat you to it.

Robert just always have a plotting program nearby. Usually for bivariate data, I'd prefer a scatter plot. But when I look at Robert's plot here, the data is correlated in such a way that nothing stands out. The between-country variations appear to be much larger than the within-country variations.

I've written some SAS/Graph code to produce a chart like the oririginal bar chart, if anyone would like to grab a copy and experiment with it ...