Which is the bigger mess?

The Economist spoke of a "perfect mess".   Was that the Bundestag or the small-half-donut-inside-a-big-half-donut mess?

Presumably, it was something about the distribution of seats that so disturbed our esteemed editors but the reader is unlikely to empathize based on this chart.  One will be mistaken to think the size of the Bundestag doubled from 2002 to 2005; in fact, it only grew by 10 to 613 seats in 2005.

In the chart on the right, the gains and losses in seats by each party are made front and center.  This is a good chart if seat changes are the key message to be conveyed.  Lying hidden in this presentation is the fact that the two largest parties has continued to dominate despite losing some seats to the small parties.

Again, I turn to the Bumps chart.  Here, both the relative sizes of each party and the gains/losses are clearly depicted. 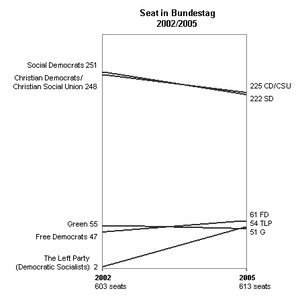 It is also easy to read off the rankings by number of seats in 2002 and 2005.  For instance, the Christian Democrats overtook the Social Democrats in 2005.  The Left Party enjoyed a spectacular rise while the Greens suffered, becoming the smallest party, even though it lost only four seats.  The total number of seats is also included without clutter.

At long last, the so-called mess is evident in the criss-crossing lines, indicating that the ranking of the parties was turned topsy-turvy in the recent election.

Reference: "A system in crisis, a country adrift", Economist, Sept 22 2005.
Thanks to Annette for help with this post.

I am so sorry to comment so late on this entry, but I can't let that stand. I would argue that the original Economist graph got it right. The mess is not the gain of power by the smaller parties or the miraculous rise of the Left party but the inability for either political side to build a coalition. You need 50% of the parliament to be the governing coalition, to have your chancellor and your cabinet. Until 2005, the governing coalition consisted of Social Democrats and Greens, making up over 50% in a middle-left coalition. Before 1998, the Christian Democrats governed together with the Liberal Party (Free Democratic Party) in a middle-right coalition. Both those coalitions were impossible in 2005. That was the mess the Economist was talking about and this information got completely lost in your graph.
The election result ultimately lead to a super coalition of Social Democrats and Christian Democrats.
Now smaller points that I think are not that good in your graph:
The abbreviations for the parties are mostly wrong. The Free Democrats are the FDP, the Social Democrats are the SPD, the Christian Democrats are the CDU, the Left and the Greens have no abbreviations. This may sound like a small thing but think how confusing it would be if someone would not use D for Democrats but something like De.
The Left party had no miraculous rise, it was more a combination of two smaller parties uniting in addition to Germany having a 5%-rule, where parties under 5% do not get seats in the parliament. Thus, a small change between 4.9% and 5.0% leads to a very big change in the number of seats.
So, whereas it is questionable if the problem of having a coalition of at least 50% can be understood with the original graph, your graph shows small electoral changes from 2002 to 2005 and says that somehow, this should be a mess.
Again, I am sorry for the late comment.