A few of us were having a lively discussion about the "start-at-0" rule recently.  The "start-at-0" rule says that the vertical axis of any graph ought to start at value 0.  The rule was mentioned in Huff's classic booklet, "How to Lie with Statistics"

: as the name implies, the rule is intended to eradicate mischievous graphs that exaggerate small differences by not starting at 0, which is to say, by choosing a misleading scale.

, have long realized that the start-at-0 rule is not absolute, and we essentially re-discovered this in our discussion.  My own "anti-rule" stipulates that if all data appearing in a chart are far from 0, then don't start at 0.

If, on the other hand, some of the plotted data are close to 0, then it is essential to start at 0.  Here is one situation where I would use the start-at-0 rule: (this is the situation Andrew described in the comments)

Note the spectacular plunge from $8 billion to under $1 billion in 2005.  Unlike the Civic sales chart, here they picked a long time frame and started at 0, allowing readers to visualize the remarkable trend.

In the junkchart version below, I touched up a few things.  Shading the area highlights a feature that carries little useful information so I removed that.  Instead, the breakpoints on the time-line and the annotations should identify the inflection points on the curve.  Also, it is important to cite the starting and ending dates since they don't fall in Dec/Jan. 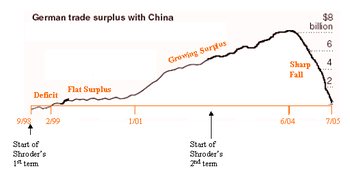 Finally, a question for the economists: why did the original graph say "12-month surplus"?  It seems to me that they plotted the trade surplus/deficit at the end of each month from Sept 98 to July 05...  The text actually said: Germany's trade surplus with China peaked in the summer of 2004 when the 12-month total was $8.1 billion.  I'm confused.

I haven't seen the data you're looking at but (usually) trade balances are reported over a 12-month period because of seasonality: agricultural products, manufactured goods, and raw materials all have a season to them so the value of trade varies in a regular pattern over the course of the year. A 12-month running sum is a simple way to handle it.

This may be outside the scope of your critique, but what was the state before Schroeder's first term?

One problem with time series plots is that no time frame is long enough.

does anybody know what a zero rule is in D.T and how to use it. i have an exam in a week and i need to know what it is.
thankyou ella.x.x

One problem with time series plots is that no time frame is long enough.
+1