Data graphics are frequently used for comparisons, whether comparing the number of wi-fi networks across states, ad spending from year to year, efficiency of baseball teams from coast to coast, or labor costs across countries.

Comparability is not always attainable but such situations can often be rescued through data transformation or standardization.  For example, unit labor costs were compared against the EU average.  Avoid the pitfall of comparing apples with oranges, as in the following set of charts from a McKinsey report:

The accompanying (abridged) report has this to say about the graphs:

Germany, Japan, and the United States have traditional hump-shaped life cycle savings patterns. In these countries, aging populations will cause a dramatic slowdown in household savings and wealth. In contrast, Italy has a flatter savings curve, resulting in part from historical borrowing constraints that forced households led by people in their 20s and 30s to save more. Thus an increase in the share of elderly households will have less impact on the country's financial wealth.

A first glance at the charts can leave one mystified as to how Italy's curve is "flatter" and not "hump-shaped" like those of Germany, Japan and the U.S.  A closer inspection reveals that each chart has its own scale because the savings rate is expressed in each country's currency.  The junkchart version below establishes comparability by expressing all amounts in U.S. dollars (using the Jan 3, 2000 exchange rate); once that is done, all five curves can be plotted on the same graph, facilitating visual comparison. 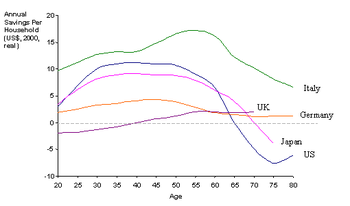 Do you have a bandwidth limit? I love looking at your figures but they're all too small for me to see (even the click-through version).

Paul, Not sure why you can't see the graphs. I have no problem on my browser. For instance, on this page, do you have trouble with my version of the lifetime savings chart? Which browser/OS are you using?

I really liked your treatment of the savings curves, but how did you get the raw data to modify? I couldn't find a link in the McKinsey report and they refer to them as MGI estimates.