Alan Schwarz looked at this table and concluded that rookies are "getting consistently older, not younger" when they make their first appearances in an MLB game.

If we just consider the last row (TOTAL), the average age by decade regardless of playing positions, his conclusion makes sense, at least from the 1960s to the 2000s.

Alan went a step further, providing data to help interpret the average age based on the positions of the rookies.  The nine additional rows contain 54 more numbers, with values all within a narrow range (22-26).  How should the reader interpret these numbers?  The following chart lends some help.  The black line depicts the average debut age over all positions and is identical in each graph, establishing a standard for comparison. (The vertical axis plots average age at debut.) 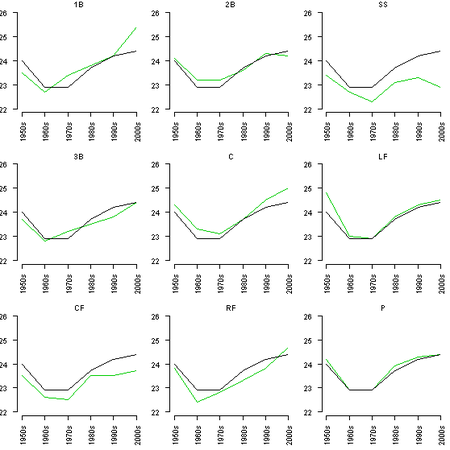 Here are some key insights:

All these points can be obtained from the table of numbers as well; it just takes much more time and much more effort than looking at a chart.

Reference: "For Baseball Rookies, the Only Rush Is to Judgment", New York Times, Sept 4 2005.

Here's an example of a similar idea. This is a comparison of how different polling firms have measured the President's job approval over the course of his term:
http://anonymous.coward.free.fr/polls/approvalbypoll.png

Each panel shows an overall combined trend line and how each firm's polls relate to that trend. You may be able to see that Fox tends to run above trend while Zogby, Harris, and AP tend to run below.

(In case you were wondering, the panels are ordered by the number of polls: in these data Gallup has done the greatest number of polls while Quinnipiac has done the fewest. Prior to Nov 2003, AP polls were done differently so I truncated before that).

I just hate when guys like Matt Holliday break into the league and 27 and a few years later their prime is already over.

Does anyone know how debut ages differ between high school and college draft picks?

Do high school picks actually get there faster, and if so, how much of a difference does it make on average?

If you have an answer, please email me at leftys_best@yahoo.com!