A variant of the "half-baked" disease

The disease of the "half-baked" (see here) is in fact widespread.  The Wall Street Journal and other media outlets have a liking for this particular feature in their bar charts.

In the chart on the right, 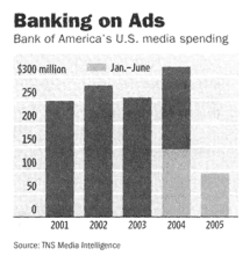 Why not split every bar so that we can accurately judge the size of the half-baked 2005 bar?  Alternatively, remove the gray bars and draw in a projected full-year 2005 number.