Mahalanobis and I have been communicating over a graph that first appeared in the Economist, reproduced below.  The graph purportedly supports their front-page story on "Germany's surprising economy".  He helped clear up my initial confusion over what was being plotted. 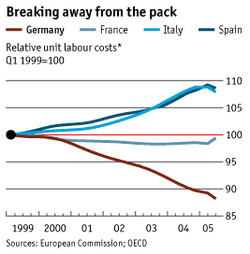 This double indexing confounds sources of change, potentially misleading readers.  The 5-point decline represented a 5% decrease in Germany's relative cost.  Even if Germany's labor cost stayed flat, this 5% decrease can be entirely due to other Euro countries performing worse.  In fact, Germany's curve would still show a decline when its unit labor costs are rising, so long as other Euro countries suffer worse setbacks.

Below, my junkchart version (on the right) is superior because it separates the two effects, showing both the growth/decline in unit labor costs within each country as well as the labor costs relative to the Euro average in each time period.  The left-side chart uses a double index akin to the Economist version; the only trick I used was removing the second index (so that only the Euro average is 100 in period 1).

The story Mahalanobis and I concocted is now clearly seen: Germany had historically had higher labor cost than France and the EU but has quickly narrowed the gap from period 1 to 3.