Mahalanobis created the following graph to illustrate how different regions of the world compare to OECD countries in terms of economic growth (Look here for entire post: Mahalanobis.)

Admittedly, he did this over "two bottles of wine", imposing the blue lines on top of the red "base OECD trajectory".

The key messages that can be discerned from this chart are few:

After some thought, I came up with this graphic: 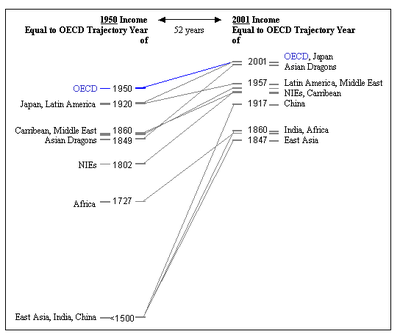 Here I have lined up all the regions so they are separated by the same horizontal distance of 52 years apart.

The speed of growth is coded in the gradients of the line segments.

The OECD baseline trajectory is colored in blue so that any region's speed of growth can be contrasted with the baseline.

What additional insights can be drawn from this graphic?

This set of data presents quite a challenge for visualization.  You're encouraged to submit alternative charts in the comments.

please check it its imp to be checked