Bubble charts and their discontents

In a recent post about NYT's blinding spots, I cited a chart showing Wall Street being "more bullish on Walmart than Costco".  Here, I reproduce it, and next to it, I put the table of numbers without the gridlines and bubbles. 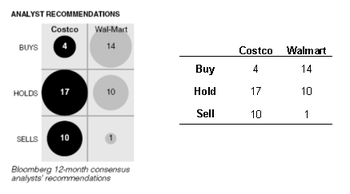 In my mind, the bubbles (and gridlines) distract rather than inform.  The use of black versus gray further distorts our perception.  The table on the right is just as good, if not better.

Bubbles are notoriously misleading because of our inability to compare areas as well as the lack of a scale.  For example, how large do you think the bigger circle is? (Answer at the end.)


Also, it is not sufficient to compare the absolute number of buys, holds and sells because the total number of calls are different.  For instance, 10 buys out of 12 calls means something different from 10 buys out of 40 calls!

The key to reading this data is the median: if we line up all analysts with buys to the left and sells to the right, what call did the analyst in the middle make?  Which call the median analyst made depends on both the total number of analysts and the proportion of buys, holds and sells in the sample.  The following chart anchors at the median analyst, stretching out on both sides of that middle point: