This graphic, from NYT, was produced for admiration.  Lets stare at it for a minute. 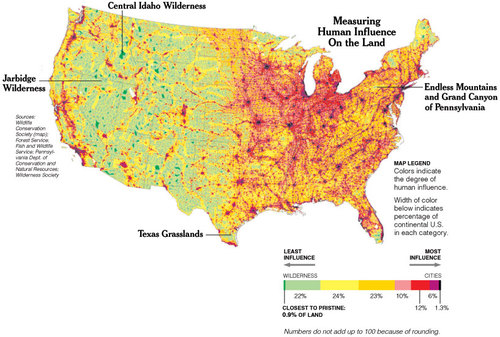 Undoubtedly an uncommonly beautiful map, I rate it below the previously praised Wi-fi Nation map.  What renders it so visually alluring is its high resolution, what Tufte calls a high data-ink ratio.  Indeed, there is almost no wasted ink, every pixel carrying some data.  If we reduce the resolution, the map will for sure look a lot less impressive.  So this is one of the few instances where I'd allow such high data density.

Why is this short of perfect?

By itself, the map does not convey much insight.  If we ignore the text and the legend, pretty much the only message we can read from this map is a tale of two regions: the eastern half is heavily human-influenced, and most of the less-influenced land is in the west. We will be misled into thinking that the red and the green each takes up roughly half the area.   We can see highways and cities but that is not telling us much. If carefully examined, we can make out the Central Idaho Wilderness.

In other words, all the important insights are conveyed via add-ons such as the call-outs to the 4 most pristine areas of the country.  Also the information-laden legend, magnified here:

Through this legend, we learn the amount of wilderness.  Observe that red only constitutes less than 20% of the country yet we thought it covered half of the map.

Make no mistake: this is an extraordinary legend that is a graphic in its own right, a bar chart showing a distribution.

What separates a good graphic from a great graphic is the union of form and function. Here our brain can pick up region-level cues (eastern half vs western half) but the map provides us highly detailed data (municipality-level?), which contribute to the beauty but not our understanding of the data.

Tom, a statistician friend, has the following comment: what do the different colors really represent?

That is indeed a deficiency of this map. The legend, which is a bar chart in its own right, has a missing axis! What metric was used to measure human influence? Why were non-uniform cut-offs used (e.g. the yellow bar is much larger than the pink bar, why?)