In Praise of the Bumps Chart I

In my opinion, the Bumps chart takes the crown for perfect alignment of function and form. In this post, I describe the Bumps boat race and in the next post, I will explain why I like the Bumps chart so very much.

Unlike American colleges, where athletics claim a prominent role and where athletes achieve iconic status, at British universities pretty much the only sport that matters is rowing (called crew in the U.S.).  In particular, the annual Boat Race between Cambridge and Oxford can be compared to the Game between Harvard and Yale. Now, Cambridge and Oxford both consist of more than a dozen colleges, which are autonomous academic and residential units.  Each college has their own boat club and their boaties (rowers) face off at races known as "Bumps". 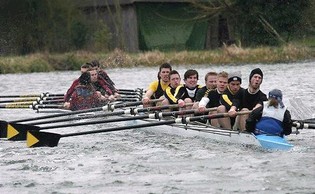 The Boat Race is a standard side-by-side race: the first boat to cross the finish line wins.  By contrast, at the Bumps, the competing boats start from a single line; each boat chases the boat ahead by "bumping" or touching before it gets "bumped" by the boat behind.  When a bump occurs, both boats exit the race.

The Bumps happen over four days, with one race on each day.  Thus, after four days, normally a boat can move up or down by up to four slots.   On rare occasions, a boat can "over-bump": this happens if the two boats in front bump, and the said boat then catches up with the boat that has started three slots in front.  Triple over-bumping has also occurred, which means a boat has moved up five slots in one day.

The starting order of one year is the ending order of the previous year, ever since the 1820s (at Cambridge).

triple over bumping moves you up 7 places actually